A week in paradise

In January of 2016 I visited the beautiful island of Maui in Hawaii with a life long friend of mine. We traveled around the island doing as much as we possibly could in seven days. People are always curious about the travel to get there from Pennsylvania. I admit, it was a lengthy process to get there. But when we finally did, I could see why Maui is so sought after. 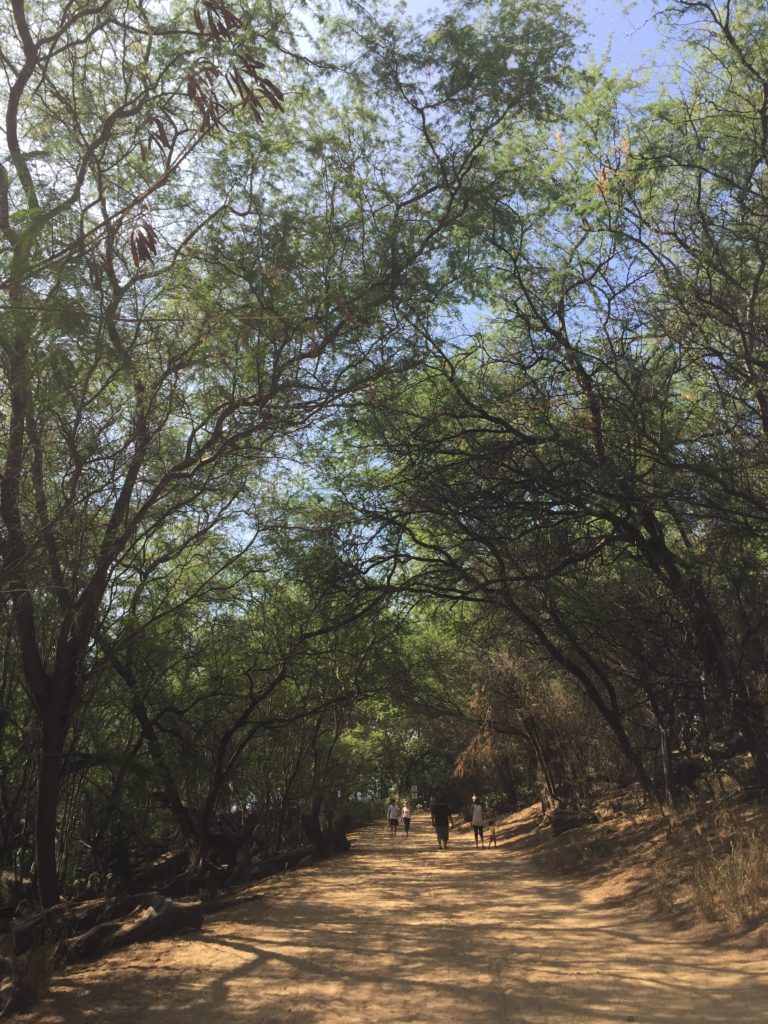 The first day we arrived we traveled to Big Beach. It was a little bit of a drive from where we were staying but it gave us a chance to get to see the island. As soon as we arrived we saw a food truck which I knew I was going to be enjoying later on in the day. They had delicious fish tacos. 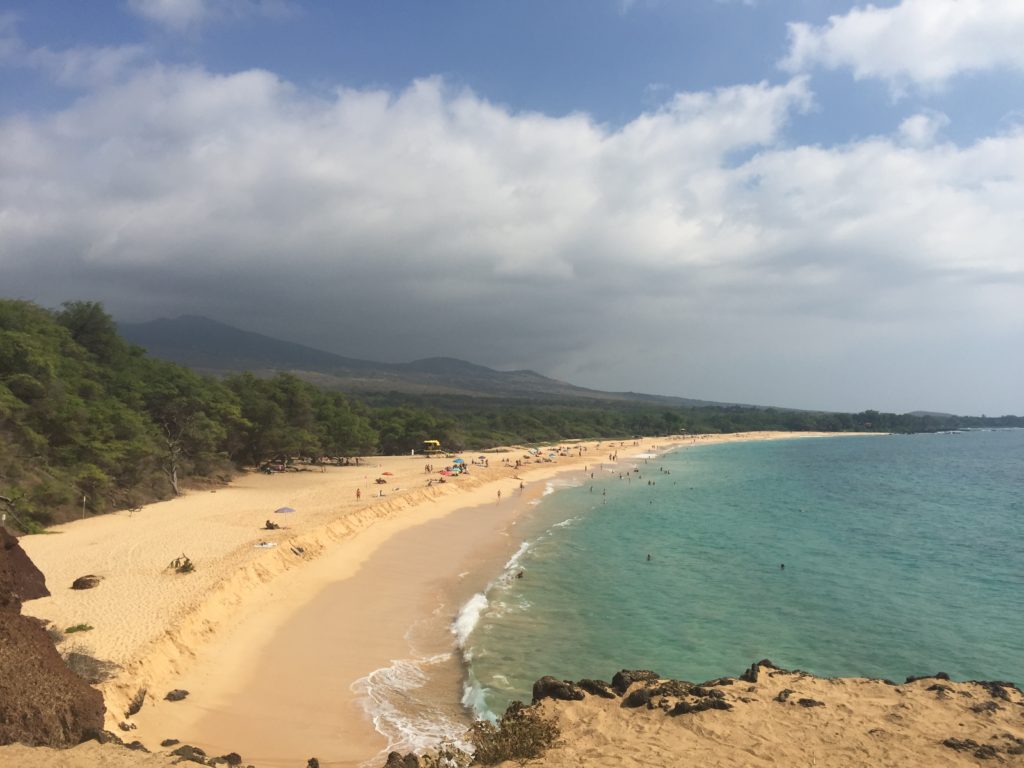 The beach was BEAUTIFUL, with soft white sand and clear blue water. This view is actually from where Little Beach begins. We hiked up in bathing suits and flip flops. Probably not the best choice, but we had to see the view and get a peak at Little Beach.

The next day we decided to explore the Road to Hana. Prior to our trip, I spent some time researching some must see spots and this kept coming up. It sure was an experience to remember. This is an all day trip. We took the time to agree on places that we all wanted to see. We did a hike to different waterfalls, stopped at a fruit stand, the bamboo forest as well as some other spots. There are some crazy turns and the road is narrow in spots. We earned our “I survived the Road to Hana” shirts! 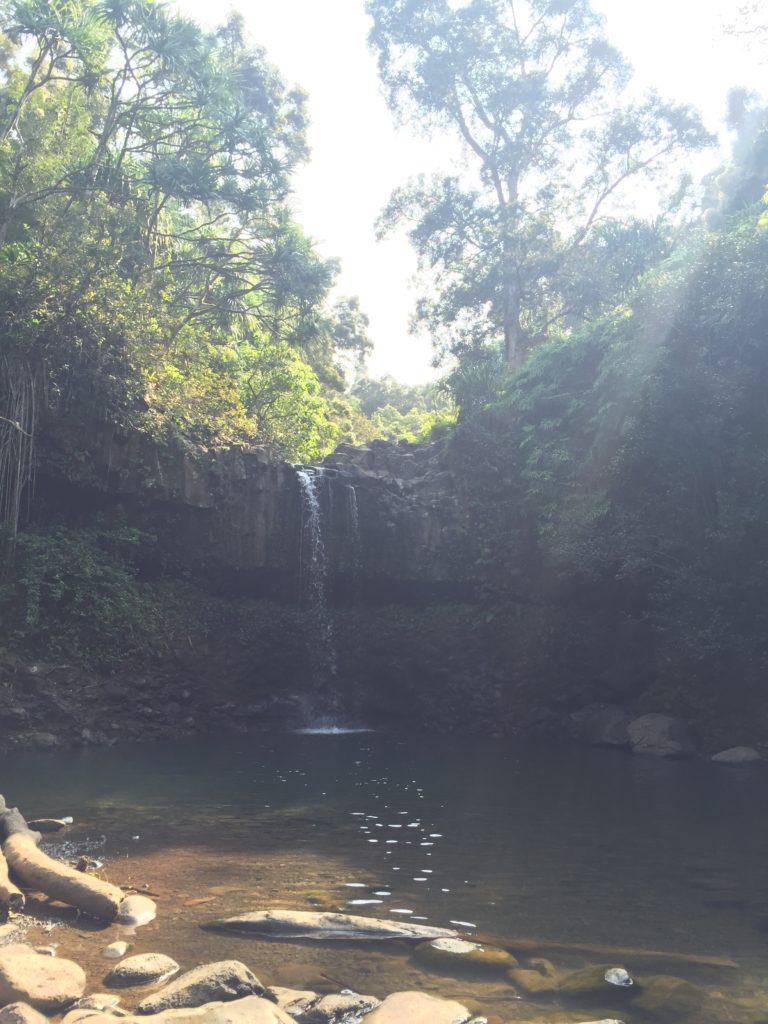 This happens to be the second waterfall that I braved. It was an exhilarating jump. I’m still trying to decide if it was worth the whiplash. (I did end up seeking out a wonderful chiropractor that fixed me right up). 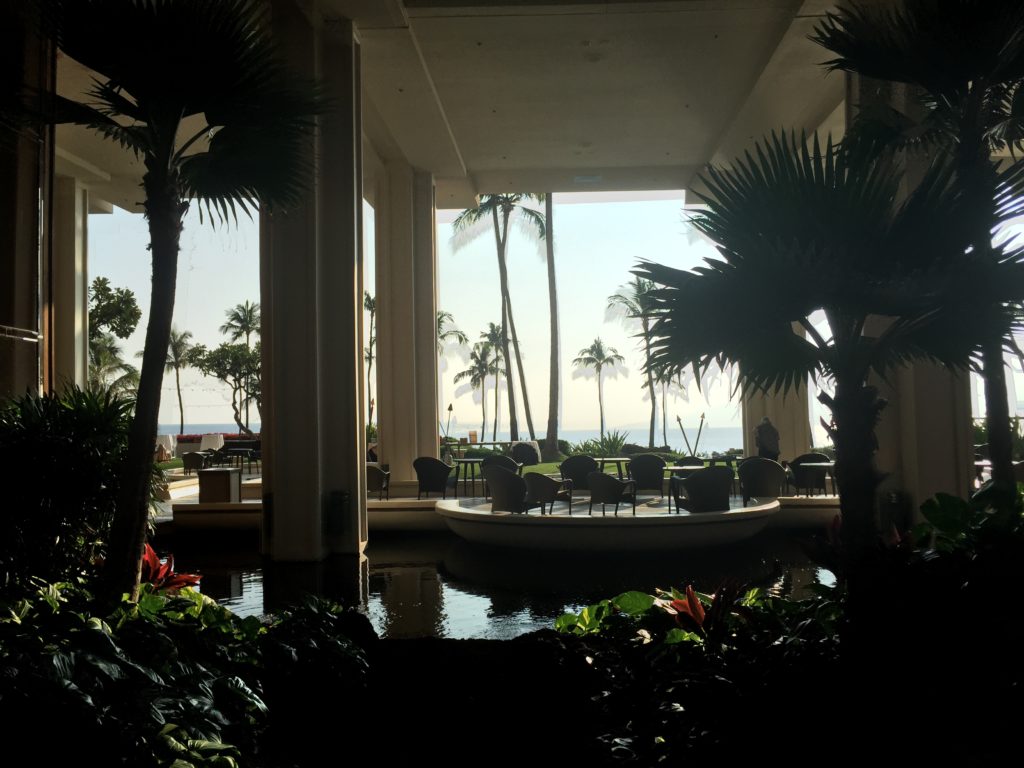 We were set on picking out a traditional Luau, which is a must do! We called around to a couple of different spots and luckily got into Drums of the Pacific at the Hyatt. The Hyatt is a beautiful hotel that I would consider coming back to enjoy. Everything from the Hula dancing to the ambiance to the food was exactly what I had imagined it would be. Just a word of wisdom, we did try to freeze our orchid lei’s that we received upon arrival and were not successful in carrying them home. 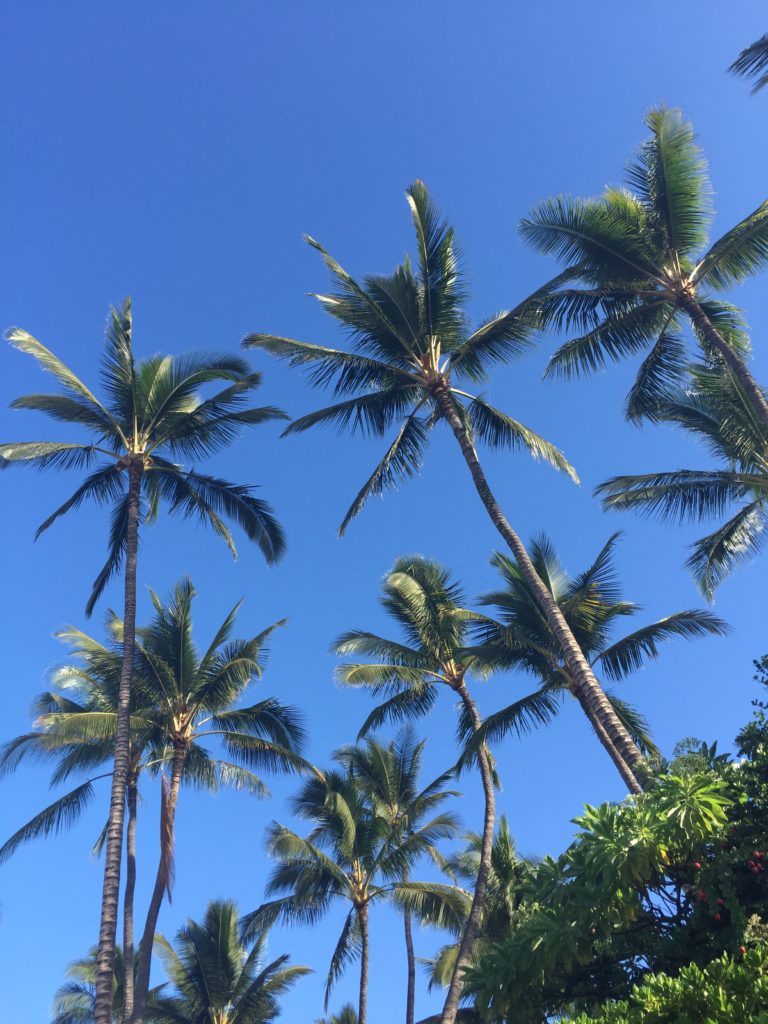 I loved taking pictures of palm trees while I was visiting Hawaii. I may have taken a few too many, but they are everywhere and they’re beautiful!

The following day I woke up experiencing some excruciating pain from the whiplash which I kept on trying to put off. I decided to pass on the day trip to Molokai (which I hear is beautiful) to visit the chiropractor and do some exploring on my own. Dr Latter of Advanced Chiropractic was super accommodating and fit me in on two occasions to help me feel whole again. I highly recommend him. 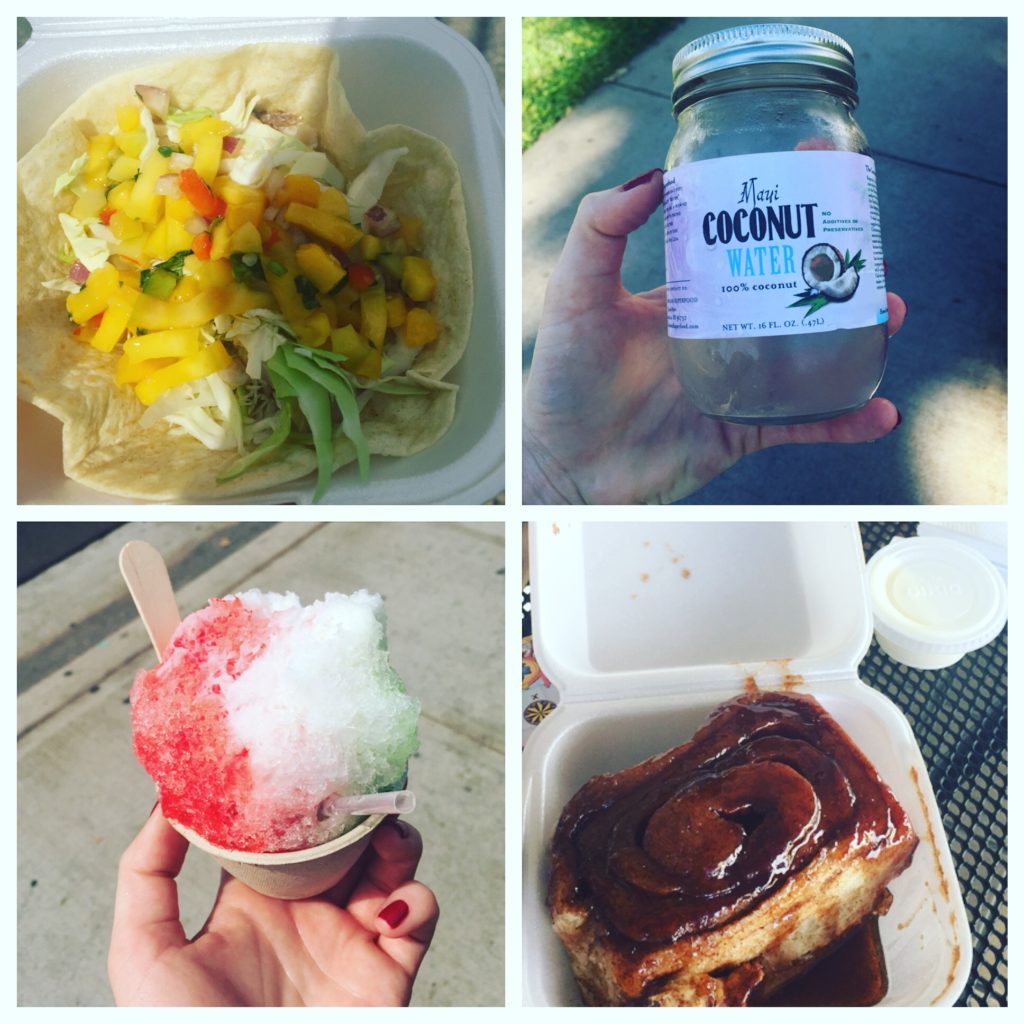 I strapped on my back pack and decided to walk as far as I could. I decided to take an Uber to Paia as I had a feeling it was right up my alley. Along the way I stopped for shaved ice, fish tacos, coconut water and a cinnamon bun. 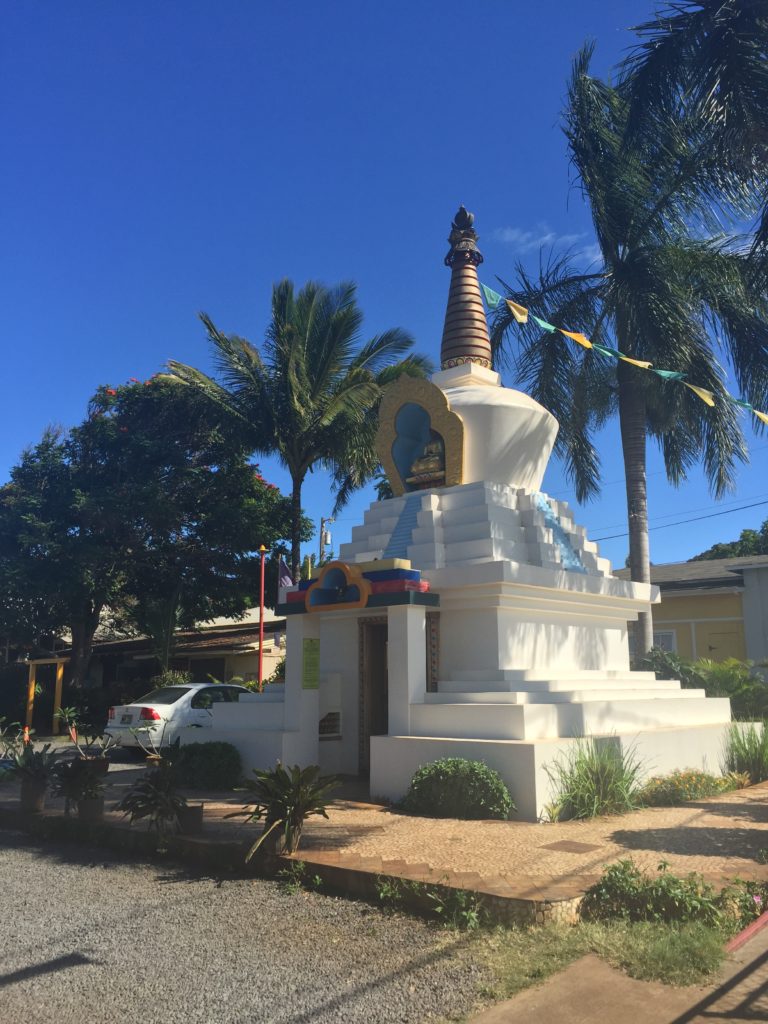 I asked my super nice Uber driver to drop me off at the Maui Dharma Center so I could see it for myself. I wanted to enjoy the Tibetan style temple. I stepped inside and saw the prayer wheel and took a few minutes to enjoy the peaceful atmosphere. 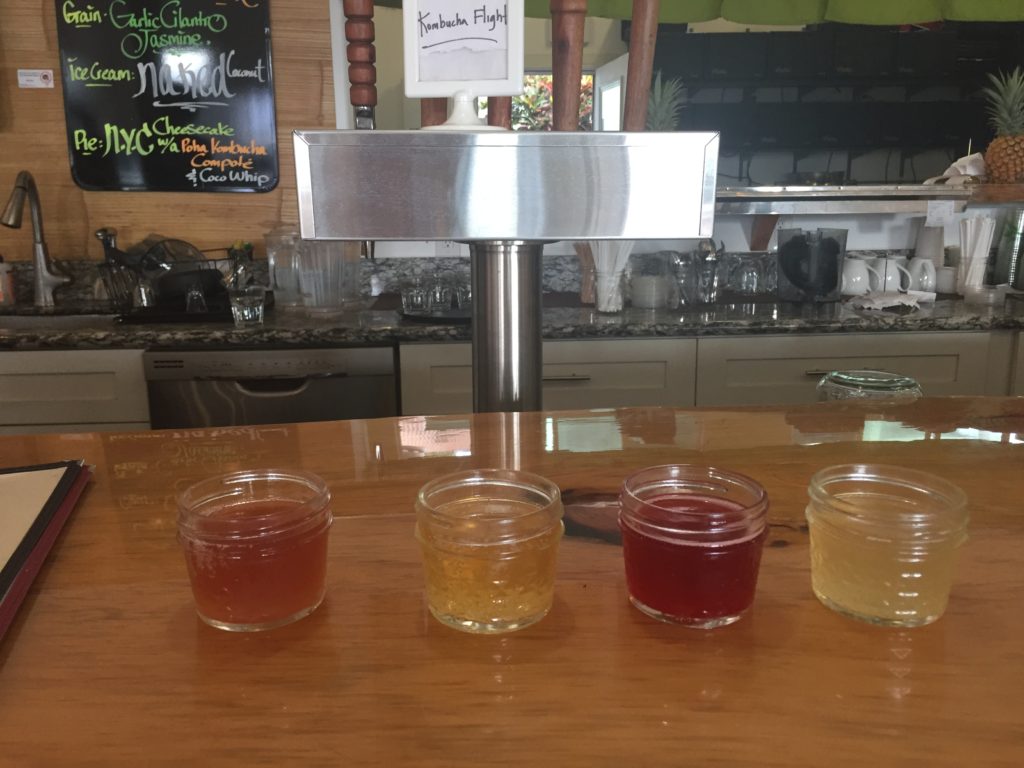 I stopped for lunch at Maka by Mana, a vegan gluten free café. I add the best Kombucha flight and a fresh salad. I enjoyed the company of one of the locals who shared her love of Maui with me. After lunch, I did some shopping, buying some tops and a dress at Mahina. I picked out some exquisite jewelry at Wings that I knew would be easy carry home souvenirs for my family and friends. Pearl had a beautiful black dream catcher that I knew would go perfectly in my bedroom. Coincidentally, the dream catchers were hand made in Paris, so it was shipped to me after my trip. The entire town of Paia is chic, trendy and laid back. It’s a wonderful town filled with delicious spots to enjoy a bite to eat and pick up some unforgettable gifts to enjoy when you get home. 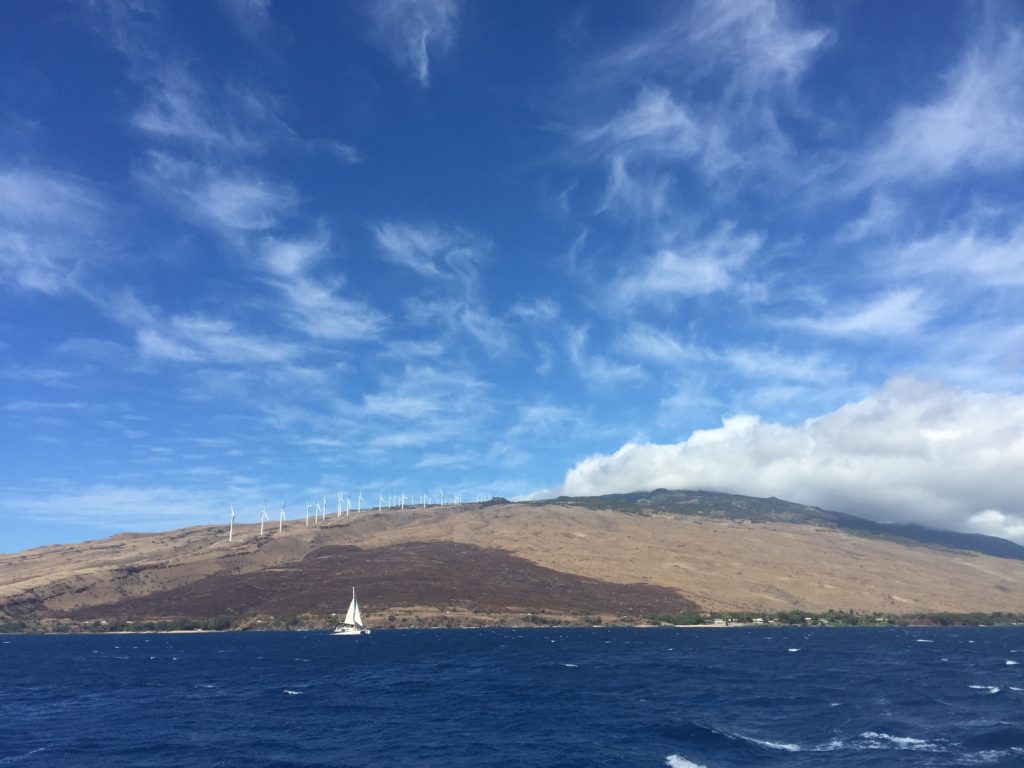 Whale watching was a must do for us while in Hawaii. We were there at a perfect time, the whales were very active. We picked a tour that involved us being on the water for a bit of time while to experience the sites and sounds of these exquisite creatures. It was enchanting to say the least. If you are lucky enough to be in Hawaii during the month of January, put this on your list. 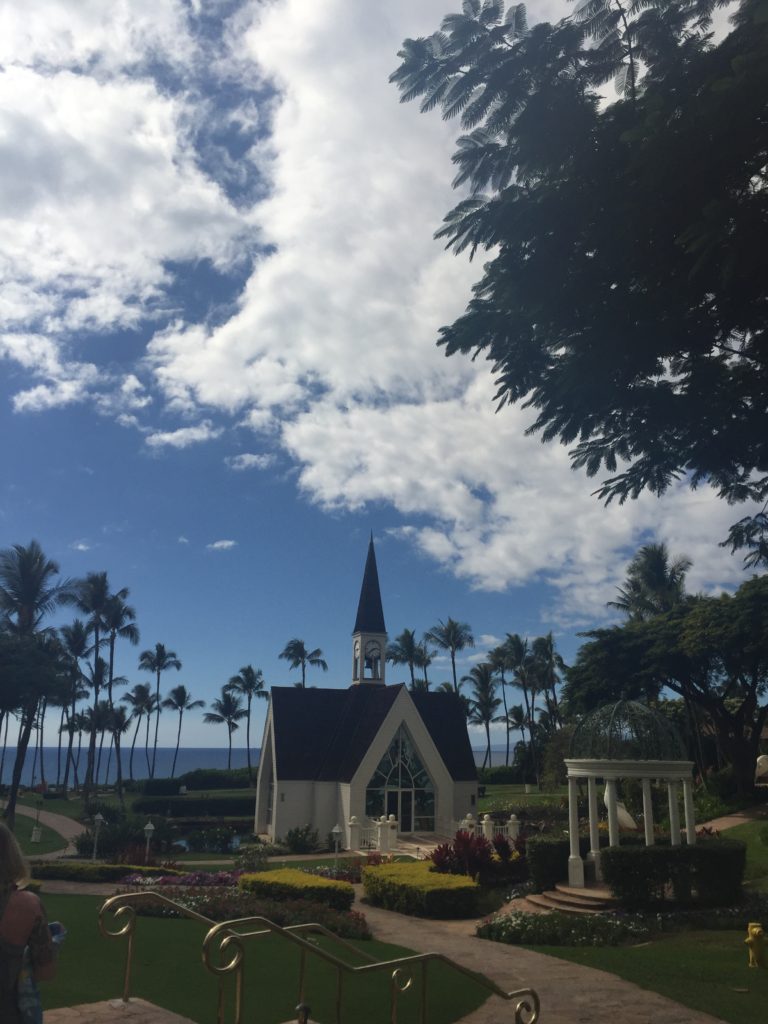 The next day we visited the Grand Wailea for lunch. It is a pristine resort. Here we enjoyed some cocktails and were informed that we were sitting across from a famous singer. We tried not to gawk as we enjoyed our lunch, but still didn’t realize who he was! 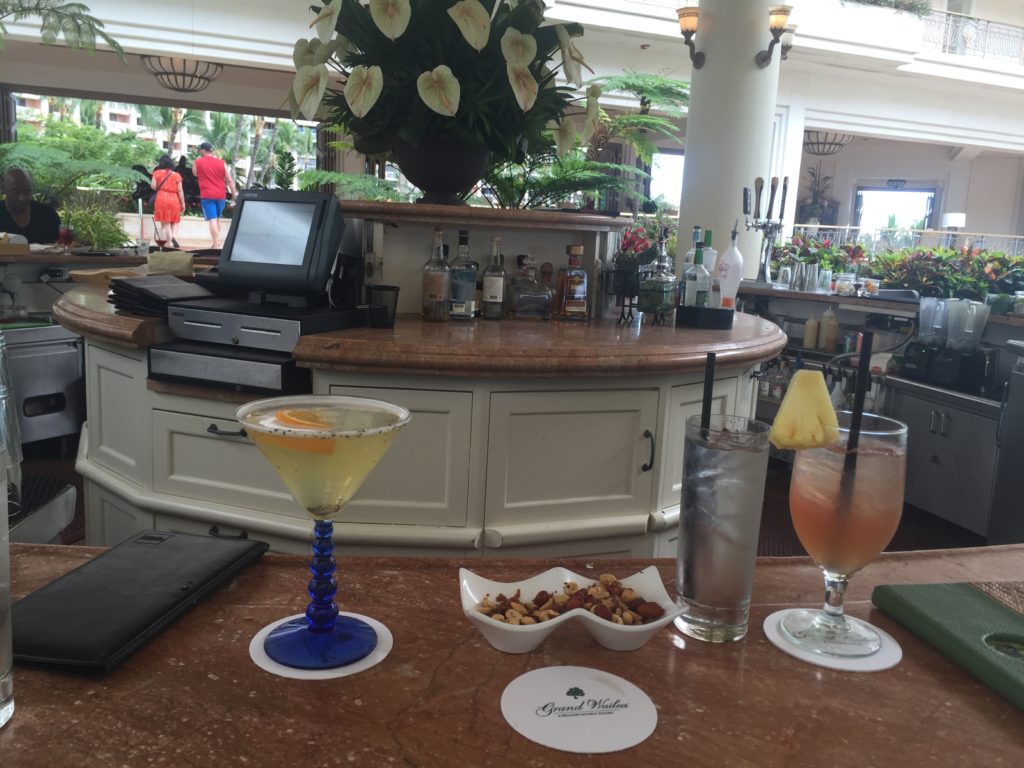 That night we had heard from a couple of the locals that Little Beach was the spot to be that night. We decided to go check it out. The beach was still very crowded even though the sun was setting. We waited in line and hiked from BigBeach up to Little Beach. Once we got up there, we realized it really was the place to be. It was an easy going crowd filled with fire dancing and music. The locals were happy to include us. The trip down was really interesting as it was dark and the tide was coming in. We worked our way down and made our way home. That night we had dinner at Monkeypod Kitchen which was one of the best meals I had during the entire trip. I can’t remember the name of the drink but it was topped with lilikoi foam and something that I’ve craved ever since. 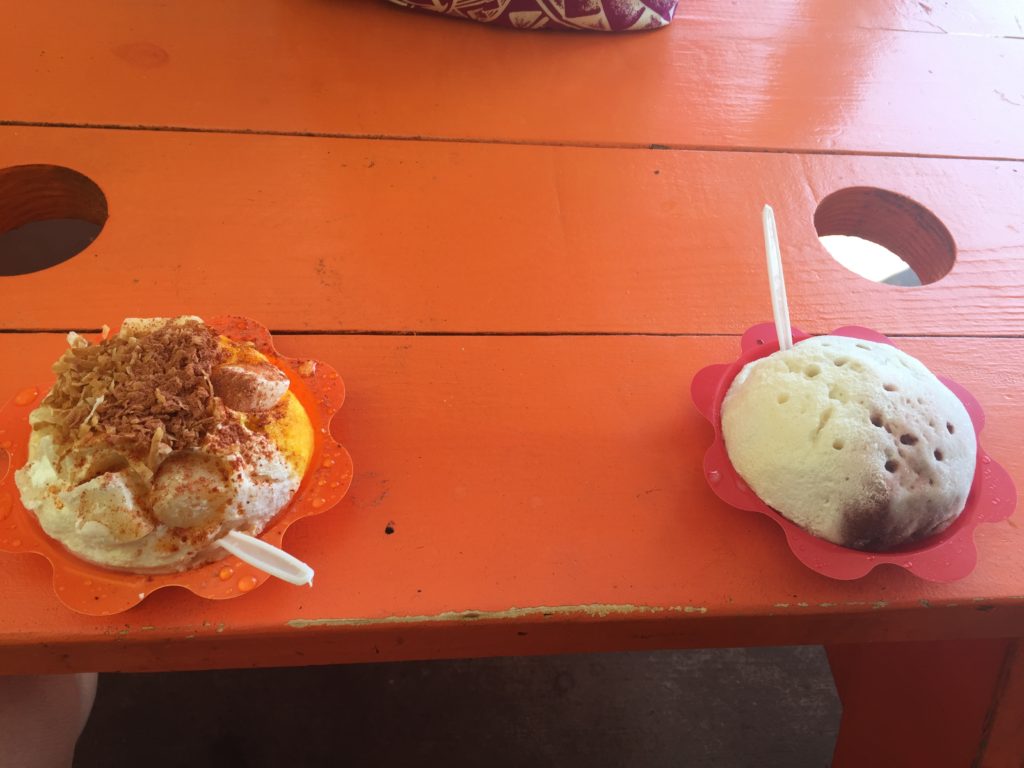 I decided to finally fulfill my need for Hawaiian shave ice. I had heard that Ululani’s was the best spot so we hopped in an Uber and off we went. This stuff is addictive! I picked three different flavors and topped it off with a Snow Cap, toasted coconut and hand-cut mochi pieces. It was so delicious; I insisted that we go back each day until we left. They even had cut outs in the table so your dish fit in perfectly and you didn’t have to worry about knocking it over. I’ve seriously considered opening up a shave ice truck here in PA so I could have this at home! 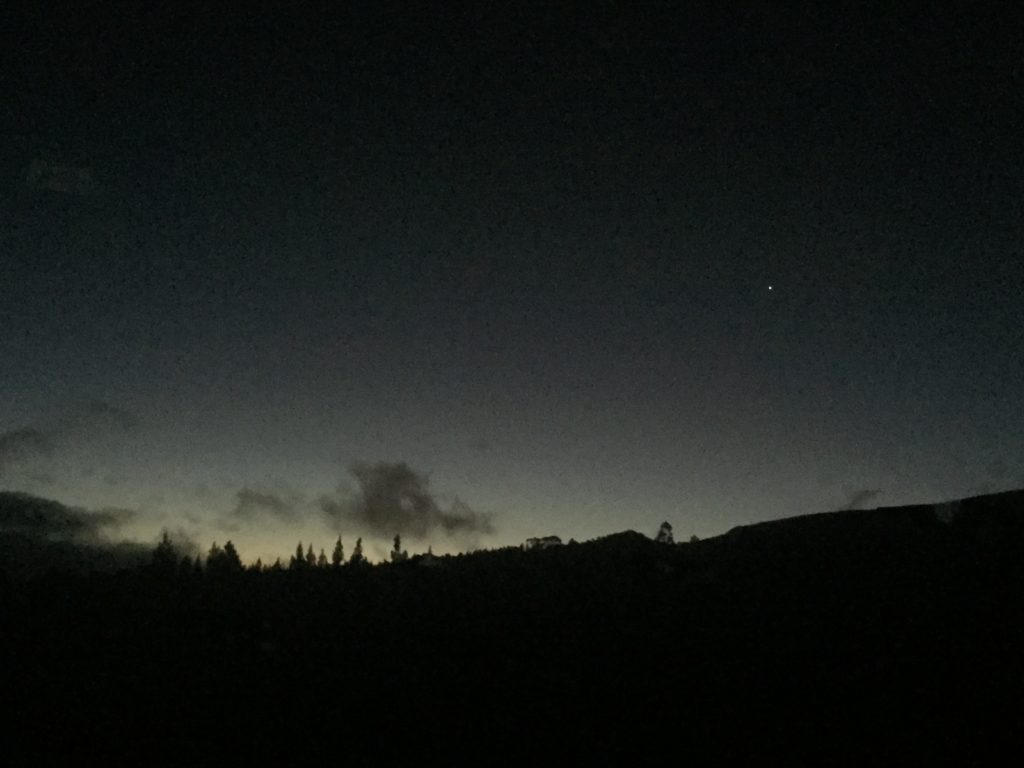 As our trip was coming to a close, we picked a morning to get up around 3 AM and drive to Haleakala National Park to experience the sun rise. When I go on a trip I always make it a point to enjoy at least one sunrise and one sunset. This view did not disappoint. It was very cold as we made our way higher and higher up. Finally at the top, we pulled over on the side of the road and waited for the sun to make its appearance. This was totally worth the drive, the cold and the early wake up! 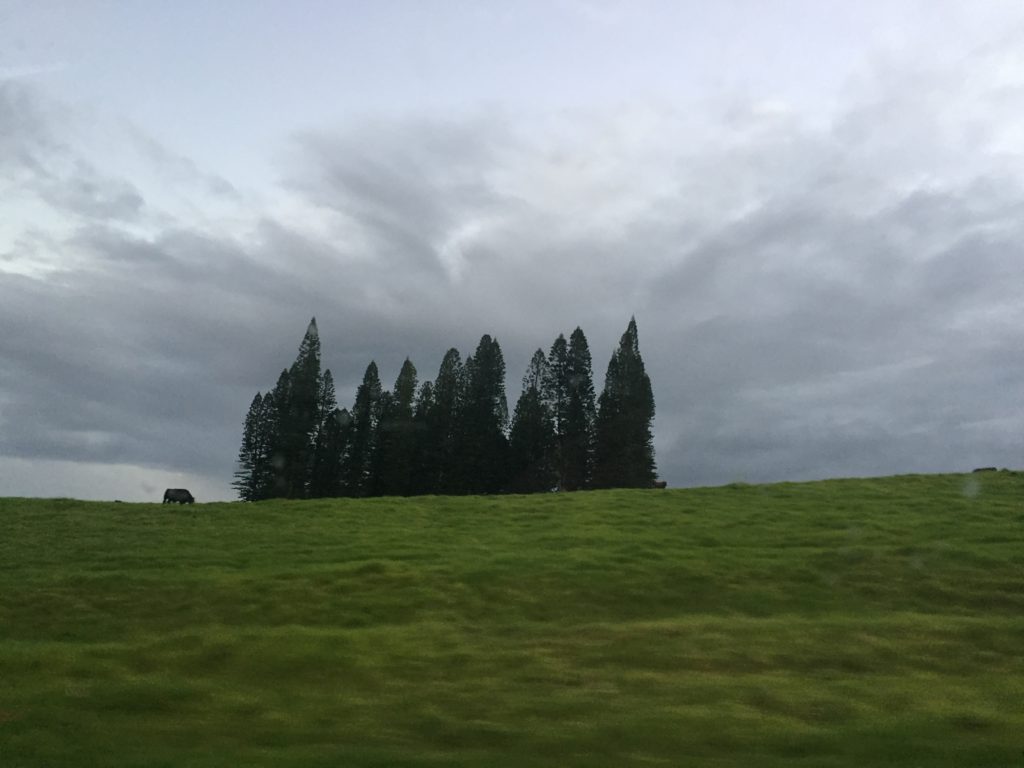 As we followed the road back down, I did my best to capture a few pictures. Everything was so green and picturesque. 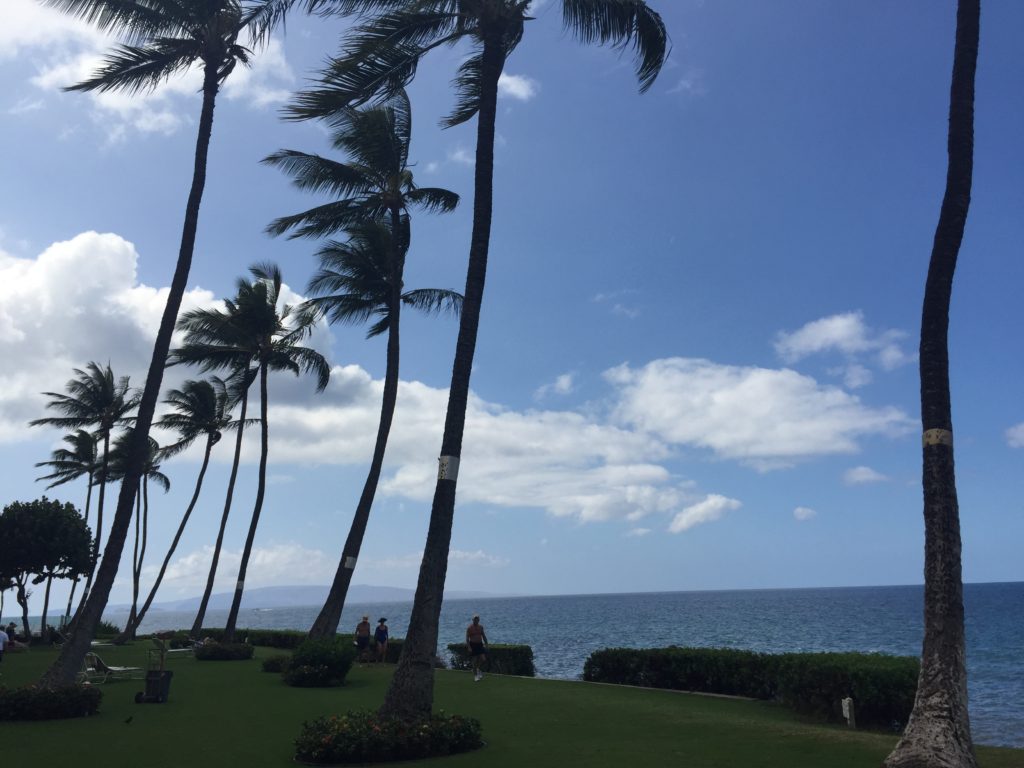 We ended up picking a later flight so we spent the last day sunbathing, savoring our last shave ice, eating fish tacos and enjoying the beach. 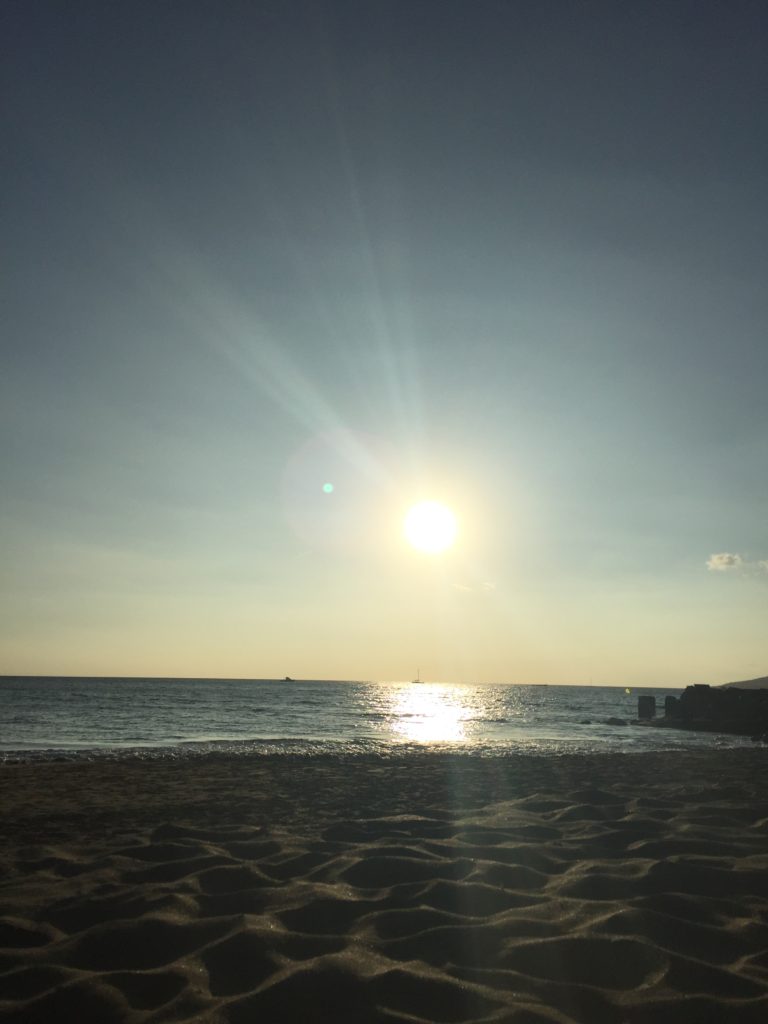 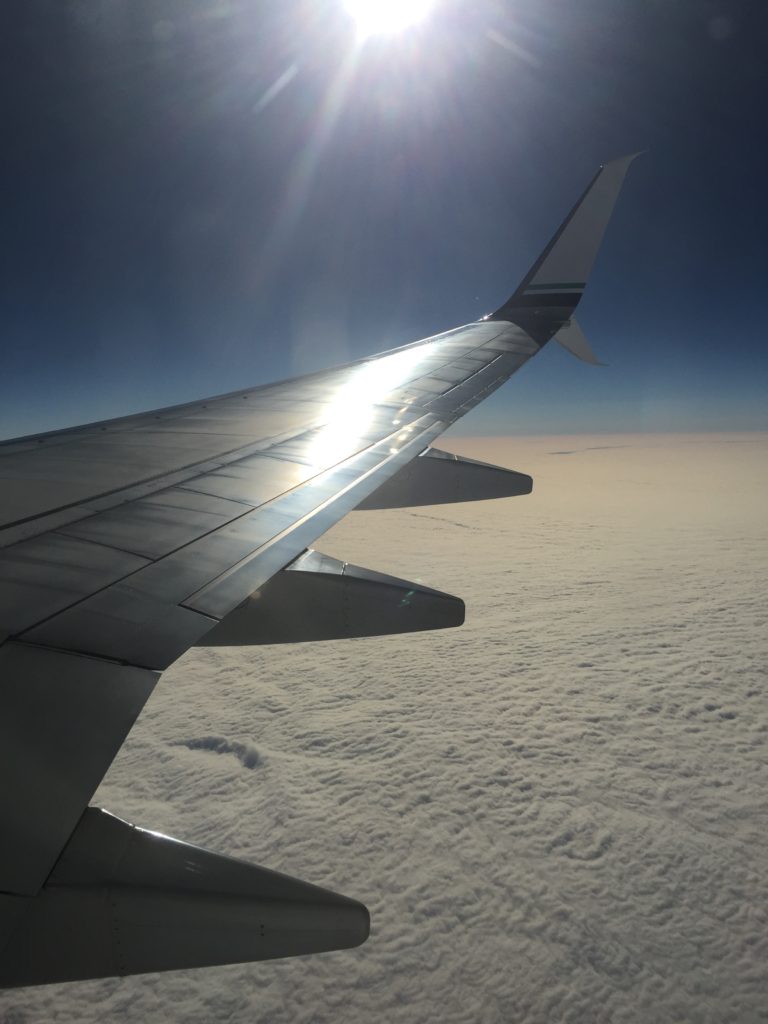 This trip was one to remember. If you have never been, I would highly recommend booking a trip to Maui sooner than later!